This monument is a collaboration between artist John Greer and architect Brian MacKay-Lyons.

It was realized by Intercontinental Sculpture Inc. and MacKay-Lyons Sweetapple Architects Ltd. for the Canadian Building Trades Unions and is now in the collection of the National Capitol Collection in Major Hill's Park, Ottawa, Ontario, Canada.

All images in both slide show were taken by © James Brittain Photography. 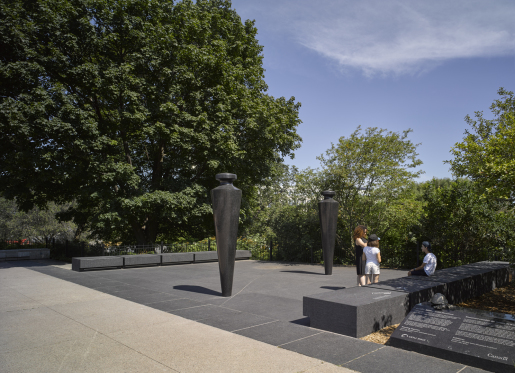 The Canadian Building Trades Monument is a permanent public art installation located on a 100m² site in Major’s Hill Park, Ottawa, ON. The monument honours and celebrates the men and women who build Canada every day and commemorates the losses they have endured in the workplace. It was unveiled on May 16, 2017 by Prime Minister Justin Trudeau. The monument consists of a public plaza, sculptural and topographical elements, engraved benches, lighting and a commemorative plaque. Its most prominent feature is a pair of oversized plumb bobs made of Cambrian black granite and mounted on stainless steel pins. Plumb bobs have been used as tools in construction projects since ancient times and here they symbolize the intersection of earthly gravity and human ingenuity.

The elegant shape used in the installation is human scaled and is like a tool. The project is thoughtfully detailed, contemporary and provides simplicity of a special idea that is open to interpretation. It creates a destination along a key route.

Click here for a VIDEO of the Unveiling of the CBTU MONUMENT by Prime Minister Justin Trudeau on May 16th, 2017
Click here for a link to the Video of the Land Dedication Ceremony for the Canadian Building Trades Monument

UNVEILING by Prime Minister Justin Trudeau on May 16th, 2017!

A few impressions of the Installation of - "Standing Together",

This monument is to commemorate and celebrate the people who build our Nation.